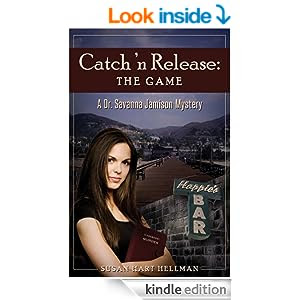 I am so happy to introduce a wonderfully talented author, Susan Hart Hellman, to my blog for a quick interview about writing and her mystery novel, Catch 'n Release: The Game.  Welcome, Susan!

Brief bio: where you live, any other writing, job related or education info.

Hello, Sofia, glad to be here. I live in Southern California, and in addition to being a novelist, I’ve been a freelance magazine writer and newspaper journalist for many years. My work has appeared in The Writer Magazine;   Horizon Air in-flight magazine; Ojai Quarterly;   the Ventura County Star;   Recovery Living, and many other publications. I was Executive Editor of Your Wedding Day magazine, and have also been an advertising copywriter, college instructor, and writing workshop instructor, including those for seniors who wish to write magazine articles and their memoirs.

My education includes a Master’s of Science degree in psychology, with an emphasis in behavioral psychology, and research with schizophrenia. After taking a break from educational studies, I’m planning on completing my Ph. D. in clinical psychology this year.

SDG: What inspired you to write this book?

Catch ’n Release: The Game (C ’n R), stems from several levels of inspiration. First, after leaving my second career in psychological testing, cognitive rehabilitation, and research (a 15-year break in my writing career), I decided I needed to return to my first love, writing.  However, I’d only written non-fiction for newspapers and in public relations and advertising, so joined the Ojai Writing Workshop to see if I could learn to write fiction too.

That group, itself, was an inspiration, and I started writing C ’n R  just as a learning tool, a writing exercise, really. But the genre I chose, a psychological murder mystery, was inspired by my work and education in the field of psychology.

SDG: What was your approach to writing it (did it just flow or did you use an outline or other preparatory method)?

Because Catch ’n Release originated as a writing exercise, I did not use an outline, but, rather, just started writing, trying to incorporate all the techniques I leaned in the Ojai Writers Workshop and at writers conferences.  But when it became obvious that that “exercise” was turning into a novel, I did prepare several outlines. I had come to appreciate the concept of outlining during my PhD program; it always helped with the required extensive papers, so figured outlining would help with novel writing too, and it did.

Now, however, I wouldn’t start a book, fiction or non-fiction, without an outline because having that structure is how I work best.  Of course, that outline may change a dozen times during the process.

SDG: How long did it take to write the complete novel from first draft to edited final?

Because  C ’n R was never intended to be a novel, time was not a factor, and I worked on it for about five years.  I used the novel to learn how to write a novel, and gave that a couple of years, under the guidance of the Ojai Writers Workshop. I was in no hurry. Then, the revision process took another couple of years, because I revised the whole novel probably a dozen times, and some scenes and chapters more like several dozen times. Again, it was a learning process, with no thought of publication originally. I was just enjoying the challenge of learning writing technique, and enjoying the entire writing process.

However, although I’m enjoying the process with the next in the Dr. Savanna Jamison series, Ring Master, this one is going much faster! I’m working on a new fantasy series too, and that is also coming together quickly.


SDG: Can you tell us a little about your book and if you have had book signings or readings?

This is my official synopsis:

Catch ’n Release: The Game, is the first in a series of psychological murder mysteries, in which Dr. Savanna Jamison, Southern California behavioral neuropsychologist, defense witness, and unintentional underground sleuth, is called upon to help defend a strange looking, possibly brain-damaged man, killer of a girl in a sleazy bar, Happie’s.  The defense, spearheaded by Savanna’s friend, Deputy Public Defender Macy Washington, seems clear cut: killer grabs a knife off the bar; stabs and kills the girl; dozens of witnesses see it.  This killer is headed for death row. Case Closed.

But the case is far from closed.  Savanna dons her newest Armani miniskirt and sets out to work, only to find that most of the witnesses she needs to interview are clueless; the bartender at Happie’s appears to be leading a suspicious double life; and the evidence has gone missing. Also, the victim and her sorority sisters nationwide have been playing a complicated, dangerous little game, Catch ’n Release. And this is the good news!

Savanna unknowingly becomes caught up in the game, and receives several death threat notes delivered in a most unconventional way. And, she’s being stalked by a killer she previously helped convict, but who’s been released from his life sentence on a little-known technicality.

And, clear to everyone but her, Savanna’s new romantic relationship is falling apart. It appears that everyone is playing some version of one game or another, each with a common goal:  catch what you can, release what you don’t want, and never, ever be the one to get caught.

Yes, there have been several readings/signings, including at a wonderful book launch hosted by Ojai’s Feast Bistro restaurant, a location in C ’n R which Savanna and Macy visit to hold all of their important discussions concerning the murder case.  More reading are being set up in both Southern California and Oregon. Also, I did enter this novel into a Writers Digest completion, and didn’t win, but received a glowing review, including this statement:

“This book is more than a book: It’s a well-conceived package that knows this book is not the end, but just a step in the path. . . .  The characters are engaging, the scenes are riveting, and I absolutely love seeing the way Savanna’s mind processes everything from the beginning of Catch ‘n Release to the excerpt of the next book. Great work.”~ Judge, Writer’s Digest 21st Annual Self-Published Book Awards.

SDG: Are your family members supportive of your writing and what do they think about your writing career?      Yes, very supportive.  My partner tries to make sure I have uninterrupted work time. My oldest daughter, Melissa Hart, is a freelance writer and author of several non-fiction books, so she, of course, is all in favor of what I do.  My other daughter, Jennifer Steinmann, does some very creative event planning, so she is certainly supportive of other’s creative endeavors.  My son, Mark, with Down Syndrome, is thrilled because I work at home and my flexible schedule allows me to “taxi” him to his dozens of Special Olympics activities, social engagements, and dates with his girlfriend.


SDG: Do you have any advice or words of wisdom for budding writers?

Definitely.  If you’re serious about your writing, take it seriously.  Treat your writing career the way you would treat your career if you worked in the corporate world. What would you do to better yourself in that situation?  Attend seminars, get your ideas and work critiqued, develop a team, join professional groups? Do that, and more, to improve yourself as a writer too.

SDG: What are you working on now? Is it in the same genre?
I’m always working on magazine articles, and now also working on some short fiction pieces, with the goal being to have them published in journals. My three large projects include Ring Master, another murder mystery, the sequel to Catch ’n Release: The Game. As I mentioned before, I’m also working on the first novel in a fantasy series, and a non-fiction technical book for writers, which is nearing completion.

SDG: What is the best time for you to write and does it ever interfere with your day job, if you have one? Also, how long on average do you write each day?
Fortunately for me, my “day job” is writing. I write magazine articles and am also spending a great deal of time right now ghost writing a memoir.

I’m definitely a morning writer, because I’m a morning person.  I guess from spending a great deal of my early childhood on my great aunts and uncles’ farm, which had barely changed, technically, from its homesteaded status, I got in the habit of starting the day before the sun was up, and going to bed very early. This included arising at 4:30 am to help my great aunts milk the cows.  This has stuck with me, but it means writing at night is totally out for me.

My average day of writing or writing related activities is at least eight hours.  I can easily write for 14-16 hours a day for days at a time if I’m really dug into a novel.

SDG: Is writing, to you, a lonely occupation?

Yes, and I love it!  Being a pretty serious loner, having the opportunity to sit alone in my office, writing for hour-upon-hour, suits my personality!   However, don’t get me wrong, I do love people, and try to go out for tea with other writers several times a week.   Also, there is a lot of socializing in the writing groups I attend (Ojai Writer’s Workshop, Ventura County Writers Club, formal writers conferences several times a year). And when I teach writing workshops, it’s great to chat with the attendees before and after class.


SDG: What is your website and where can readers purchase your book or books?
My books are available on amazon.com, printed and -book versions, and the e-book through smashwords.com.
Amazon